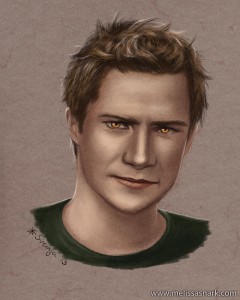 As the opening credits to the show finish rolling, the camera reveals Sam Smarmy seated in a black recliner. He flashes his bright smile until the applause fades.

Seated to Sam’s left is a gorgeous young man in his twenties with spikey brown hair and startling amber eyes. He sprawls in his chair, arms on the rests, legs wide.

“How does it feel to officially be a literary hottie?” Sam asks.

“Yes, it must be since ‘Literal Hotties Naughty Books Reviews’ has provided our forum this evening and here you are…”

“Wow.” Logan suggestively touches his stomach just above the top button on the fly of his jeans. He jerks away and shakes his hand as if burned. “Oh yeah, I’m smokin’.”

Women in the audience shout and scream.

After a second, Sam licks his lips and clears his throat. “I’m going to start with a question from our audience. Logan, Christine from San Francisco wants to know—what’s your sign?”

A small smile plays on Logan’s lips. “I was born under a bad sign.”

Sam grins. “With a blue moon in your eyes?”

“Have you got yourself a gun?”

“More like claws and teeth.” Logan smiles to show off those teeth.

“Okay, enough, enough, before I hear from Alabama‘s legal reps,” Sam says, waving his hand. “So you’re a werewolf, eh? That makes you a pretty dangerous fellow.”

“I don’t think of myself as dangerous.”

“You don’t? That’s interesting,” Sam says. “I understand your author once characterized werewolves as ‘killing machines—tanks with claws’.”

“That’s a gross exaggeration. We’re more like SUVs with claws.”

The audience responds with laughter and scattered applause. Sam waits until it fades. “How would you describe yourself? Are you more of a lover or a fighter?”

“Lover. Definitely a lover.” Logan smiles and winks for the audience.

Sam chuckles. “Tell me about your role in ‘Hunger Moon’.”

“Sure. As the story opens, I stand accused of having murdered my mother two years before. Only I have no memory of the night in question.”

Logan’s hands fist and he hesitates before answering. “Yes.”

“A convenient case of amnesia?”

Logan’s amber eyes flash. “There was nothing convenient about it.”

Sam clears his throat. “After Valkyrie Victoria Storm comes to town, she agrees to help you investigate the murder in hopes of clearing your name.”

“She agrees eventually but it wasn’t all that easy convincing her to help.”

Sam grins. “Is it true you threw Victoria’s car into a lake?”

Logan relaxes into his recliner. His grin is cocky. “Hey, I lost my phone over that. Besides, did you see her car? I’ve seen nicer toilet seats.”

Sam’s eyes twinkle. “Was Victoria inside the vehicle when you tossed it to its watery grave?”

“It got her out of her clothing, didn’t it?”

Logan shakes his head. “Not a clue.”

“Do you know what it means?”

“Is that because you haven’t been on the set of ‘Battle Cry’, the sequel to ‘Hunger Moon’?”

Logan frowns and his jaw clenches. “That’s correct. I’ve been given a few token text messages with Victoria but other than that, I don’t have a key role in the next book.”

Sam develops predatory intensity. “Are you being written out of the series?”

There is dead silence in the audience.

Logan’s eyes narrow and take on a dangerous gleam. “My fans wouldn’t tolerate it.”

Women in the audience scream in support. Ladies shout: “We love you, Logan!” and “I want to have your baby!”

“See?” Logan says with a confident grin. “The author knows her entire series would collapse without me.”

Sam chuckles. “Quite the ego you’ve got there. Well then, go ahead and share with us what your future holds.”

“The next book after ‘Battle Cry’ will focus primarily on me.”

Sam claps his hands. “Delightful. What can you tell us?”

“Sorry. Sworn to secrecy.” Logan draws a cross over his heart with his index finger.

“Harrumph.” Sam clears his throat. “Well, what about the title? Does the book have a title yet?”

Logan flushes and mumbles something indistinct.

Sam cocks his head. “Sorry, I didn’t catch that. Could you repeat it?”

Sam chortles and slaps the arm rest of his chair. “Ha, that’s quite clever.”

“I notice you’re on a first name basis with Mrs. Snark.”

“One final question before we’re out of time,” Sam says. “Lori from New York City wants to know—boxers or briefs?”