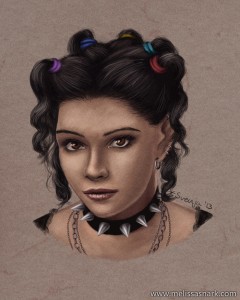 As the opening theme music and the cued applause fades, the camera pans to reveal Sam seated in a large black leather chair. “Welcome! Today, I have sixteen-year-old Morena visiting with us. For those viewers not familiar with the Melissa Snark’s Loki’s Wolves series, Morena is a teenage werewolf.”

Cued applause goes for ten seconds and then fades.

Sam flashes fangs. “Morena, thank you for being my guest today on Fantasy Gab.”

Morena clears her throat, crossing and then uncrossing her arms. “Uh, thanks, Sam. Mr. Smarmy.”

“Just Sam,” he says, with a big toothpaste smile. “Is it okay if I call you Morena?”

The teenager stares straight at him. “Morena is my only name.”

“Only one, hmm? You seem bitter on the subject. Mind if I ask why?”

Morena scowls. “My author hasn’t given me a last name. Everyone else got last names—Sylvie and Paul Thornton, Arik and Logan Koenig. Even the guy who cleaned the pool following the meatball incident in “Hunger Moon” had a surname. But not me.”

“I don’t recall the pool man.”

“Well, he got written out of the final draft.”

“Heh, well at least that’s something, huh? Ms. Snark didn’t write you out or kill you off.”

“I guess.” Morena’s face works into a stubborn pout. “But for someone so young, I’ve experienced a tremendous amount of heart ache. As part of my back story, the author killed my parents and older brother off before the series even began. In ‘The Child Thief’, she killed my best friend.”

“The body count is high in Ms. Snark’s books, I take it?”

“Not all of them. She usually only kills bad buys in her romance books. But she says the character deaths are necessary to further Victoria Storm’s character arc,” Morena says. “I think it’s a crock.”

Sam chuckles. “Let’s talk about your role in the series.”

Morena slouches in her chair. “So far, I’ve only been a supporting character. I’ve provided comedy relief. I’m in a fight scene too and then I need to be rescued.”

“Does it annoy you to be stuck playing second fiddle to Victoria?”

Morena frowns. “Don’t get me wrong—I love Victoria. We’re packmates and she’s my Alpha and everything…”

“But yes. Sometimes I wish I had a stronger role in the stories.”

“Do you think you’ll get your wish? What does your future on the series hold?”

Morena perks up and smiles. “Ms. Snark is working on a sequel to ‘Hunger Moon’ called ‘Battle Cry’. The author has promised to more than triple the number of scenes I’m in. I’m being promoted from comedy relief to a full blown sidekick!”

“That’s very exciting. I can’t wait to see what happens next. Can you give us any spoilers for ‘Battle Cry’?”

Morena grins. “I just came from the set of ‘Battle Cry’. Let’s just say there’s one really sizzling hot scene where Victoria locks lips with one of the hunters.”

Sam’s eyes glow and his incisors lengthen. “Intriguing. Can you tell us who she was kissing?”

Morena shakes her head. “I’m sworn to secrecy but I can say this! No one was very happy about it afterward.”

“I’m pleased you brought up romantic entanglements on the series.” Sam flashes a lustful sneer. “Can you confirm for our viewers that you’ve got a crush on Logan?”

Morena’s dark eyes spark with annoyance. “Is it true what they said about you in ‘The National Enquirer’?”

Sam’s face becomes blank. He casts a quick glance at his bare wrist. “Look at that! It seems we’re out of time!”

Morena grins. “Or maybe you’d like to tell me why you smell like you bathed in lime Jell-O, Mr. Smarmy?”

Waving his arms, Sam jumps to his feet. “Turn off those cameras! Cut!”