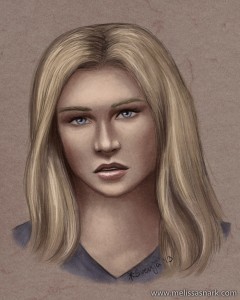 As the opening credits to the show finish rolling, the camera reveals Sam Smarmy seated in a black recliner. He flashes his bright smile until the applause fades. A gorgeous woman in her early-twenties is seated beside him with her legs crossed. She has bright blue eyes set in an oval face and long white-blonde hair.

“Good evening,” Sam says. “Tonight we have a special treat–the heroine of ‘Hunger Moon’ is with us. Everyone please give a warm welcome to Victoria of the Storm Pack.”

The audience responded with a round of vigorous applause. The host flashes a toothpaste smile and steeples his fingers. “I’m going to start our interview with something I’ve been curious about ever since I read your bio. Is it correct your nickname is ‘Victory’?”

Victoria chuckled. “That’s right. My father gave me the nickname when I was little. He said it was because I was always so determined to accomplish whatever it was I set out to do.”

The host asks: “That stubborn, are you?”

“Strength of will must be an important character trail for the female Alpha of a werewolf pack.”

The corners of her mouth turn down and her voice contains bite. “How typically male of you to put all of the emphasis on female instead of Alpha.”

Sam chuckles and smiles broadly. “You have to admit. Feminism hasn’t exactly penetrated werewolf politics. I’m only calling it like I see it.”

Victoria leans forward. “The pack political structure dates from before the Middle Ages. If male wolves need to learn feminism, then I’ll happily teach them.”

“Now, that’s something I’d love to see,” he says with a feral gleam in his eyes.

“I’m looking forward to it.” Sam laughs with delight and claps his hands together. The audience follows his lead. He waits for the sound to die down and then says: “Victoria, let’s talk about your current book, ‘Hunger Moon’.”

“That’s a great question. So glad you asked. I considered asking about your romance with Arik Koenig but that seemed so obvious.”

Victoria arches her brow. “He is the hero and the romantic lead.”

The host leans forward, expression intent. “Tell me about your relationship with Logan.”

Victoria’s cheeks turn bright pink. “I don’t have a relationship with Logan.”

“Oh, come on! You don’t expect us to buy that line. The sexual tension is—”

“A spoiler. We can’t discuss this,” Victoria said with angelic innocence. “It’s a violation of your show’s contract with the author to even bring it up.”

Laughing, Sam leans back. “All right, we’ll play this your way. Let’s talk about something less… confidential.”

A slight smile touches her lips. “Let’s talk about the weather.”

Sam clears his throat. “”So Victoria, you’re from sunny Arizona?”

She nods. “I was born in Phoenix, Arizona and I’ve lived there my entire life. I attended the ASU College of Nursing and then served an internship to obtain my R.N.”

“I understand your healing abilities lean toward the mystical side.”

Victoria’s mouth tugged into a full smile. “That’s not a question.”

Sam grinned. “And that’s not an answer.”

Her lips pursed. “I’m a priestess of the Goddess Freya. I’m also a healer but before the events in Hunger Moon, my abilities were limited and people—good people—died because of it.”

A hush falls over the audience.

“Then I couldn’t save a fatally injured man from dying.” Victoria’s tone drops to barely audible.

“You’re talking about the man you loved? Daniel Barrett?”

Her hands fist but her voice modulates to an even pitch. “Yes. Daniel’s death is what started the war between the hunters and my pack.”

“Yet, despite that, the audience really doesn’t know very much about what really happened,” Sam says. “Is there anything you’d care to share?”

She licks her lips. “No, I’m afraid I’m not at liberty to give specifics other than to say the next book in the Loki’s Wolves series will revolve around my conflict resolution with the hunters.”

“I understand your parents were killed by the hunters.”

Victoria sat up straighter and her eyes flash gold. “Yes, there was an explosion during the negotiation with the hunters. My mother and father died with honor. Their souls reside in Valhalla.”

Victoria’s tone is subdued. “Revenge may not be within my grasp. The hunters have slain most of my pack. I have to think about the well-being of the survivors. Besides, there are complications.”

Victoria rolls her eyes. “The author likes to over complicate things that should be simple.”

“Do you work closely with the author, Melissa Snark?”

“Yes, I’ve worked with Melissa on the sets of two stories—’The Child Thief’ and ‘Hunger Moon’. Three if you count the sequel, the next book in the series.”

“That’s an aggressive title. Is there a lot of conflict?”

“‘Battle Cry’ is all about conflict. Not all of it is physical. Emotional conflict is really the crux of the story.”

Sam folds his hands. “Go ahead and tell us what the story is about in your own words.”

“At the end of Hunger Moon, the conflict between my pack and the hunters remains unresolved,” Victoria says. “I finally confront the hunters and return to Arizona. I seek revenge on the vampire who murdered my lover.”

“Sounds exciting,” Sam says, grinning. “Is it true you kidnap Jake Barrett, the head of the hunter nation?”

“Here’s an excerpt for our audience.” Sam turns toward the screen behind him.