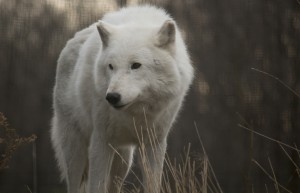 Upon casual inspection, Sierra Pines, California, located within the heart of the Sierra Nevada Mountains, resembled werewolf paradise. The exclusive alpine community clung to the western shore of Echo Lake, and boasted country clubs, million-dollar homes, and a ski resort.

Miles of pristine alpine forest full of deer and elk and other small prey extended in every direction, including the remote and rugged Desolation Wilderness. Fallen Leaf Lake and then Lake Tahoe lay to the north.

A decrepit commercial strip outside of town offered the pack sanctuary, allowing them to park their three vehicles in an inconspicuous location. On their first day, Victoria conducted a cursory search of the area and failed to turn up a single other werewolf, let alone the eligible wolf of her dreams.

She gathered her pack for the news. “Town is empty of werewolves. Let’s go.”

Omega wolf Morena threw herself at Victoria’s feet and seized her ankle. She begged on her belly. “Please, Victory, please, let us all look before we go. Freyja sent us here. We can’t give up.”

“The Lady has given us a prophecy. It would be wrong to ignore it,” Sylvie said with a disproving glint in her hazel eyes and chastising tone.

“My mother,” Victoria said. “My mother has made a suggestion. If the goddess intended this to be prophecy, then would she not have told me herself?”

“The ways of the Goddess are mysterious,” Paul said, hiding his amusement beneath an expression of stoic long-suffering.

“And your mother is a wise woman,” Sylvie said.

“Woo-hoo!” Morena bounded to her feet, grinning like crazy.

Victoria silenced the teenager with a stern stare. “We’ll look, but if any of you happen to locate this wolf, then run. Don’t let him to see you or catch you. Remember, we’re intruders in his territory. We can’t afford a fight right now.”

Sylvie and Paul nodded in unison. The pack’s dire predicament weighed upon the mated pair of Beta wolves. Their ribs showed due to months without proper nutrition, and their faces reflected perpetual hunger. Sophia and her pups suffered the most even though they ate first.

The pack congregated in the parking lot of a gas station off the main highway and lived out of their vehicles while conducting the search. The dismal little station had dirty around-back bathrooms and an over-priced food mart, but the manager left them alone and didn’t ask any questions.

Victoria surveyed their beaten expressions and knew despair. The long journey had exhausted their reserves. They could not last much longer, a fact always on her mind as she made decisions that affected them all.

Sylvie came to her that evening and laid her arm across Victoria’s shoulders. “February has always been a cruel month for our kind, Victory. My great-grandfather was Cree, and he called this the month of The Hunger Moon.”

Victoria summoned a wan smile for her friend. “Do you have any sage Native American advice for filling our bellies?”

The old woman patted Victoria’s back. “No, I’m afraid not. We just have to keep doing what we’re doing and we’ll make it through. Things will get better. You’ll see.”

“I hope so Sylvie, because they can’t get much worse.” Victoria turned toward the SUV, thinking about Sophia and her newborn cubs inhabiting the back because the pack had been unable to secure a proper den. Her failure as their leader.

Her shoulders slumped. “I’m going to get some sleep. Good night. I’ll see you in the morning.”

The next morning, Sylvie greeted her with unpleasant news. “The pups are hungry, and we’re out of food again.”

Victoria felt a knife twist in her gut, dread instead of hunger. “Do we have any money?”

The pack turned their pockets inside out. They searched the cars from top to bottom, and Morena scanned the parking lot for dropped coins, all for less than thirty dollars in small bills and change.

“What are our options?” Victoria said. “Paul?”

“Gas tanks are empty too. We rolled into town on fumes,” Paul said with a dour grimace. “Towing the Golf has saved us some but the truck gets worse mileage ’cause of it.”

Victoria glared at the hated VW Golf. “We’d be better off without it.”

“Nonsense,” Sylvie said. “It’s a sensible vehicle for getting around in. It gets better mileage than either the truck or the SUV.”

“It’s unanimous,” Morena said with a quick grin. “Everything’s empty, including our stomachs.”

“Haha, very funny.” Victoria laughed but wished she could enjoy the joke deep down. Instead, she felt weary and morose.

A cloud of steam blew from Victoria’s nose and mouth as she exhaled long and hard. She glanced skyward, but sensed all eyes on her. The others expected her to prioritize their problems, delegate responsibilities, and issue orders.

“‘kay, first thing is first. Sylvie, take our cash and buy food for the pups. Stretch our remaining resources as far as you can. Sophia will have to remain in the Yukon with the pups until we find shelter.”

“I could steal food.” Impetuous Morena knew better but the offer burst from the squirming wolf.

Paul nodded his agreement. “Stealing would bring dishonor on us all. Times might be tough but we are a proud, honest people. We don’t take what belongs to others, Morie.”

Victoria turned to the pack’s Beta male. “Paul, our next priority should be gassing the vehicles. We can’t make a quick getaway on empty tanks and the pups are too young to travel through the snow.”

“Sign says the station is hiring. I’ll go speak with the manager.” Paul directed a nod toward the ‘Help Wanted’ sign in the front window of the gas station.

Victoria indicated her consent. Paul took his leave and traversed the pockmarked parking lot at a painful hobble. The old warrior werewolf favored his bum leg. With a final concerned glance after her mate, Sylvie pocketed the money and departed to purchase food.

The Omega bounded to her leader’s side. “Are we off to find him?”

“Him?” She arched her brow.

“Him!” Morena bounced up and down. “The answer to all our problems!”

Victoria’s lips pressed into a grim smile. “We’re going to see if we can scare up some fat squirrels.”

“Oh, goody, the other white meat.”