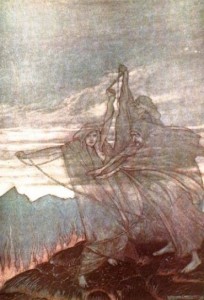 There stands an ash called Yggdrasil,

From there come the dews that fall in the valleys.

It stands evergreen above Urd’s Well.

From there come maidens, very wise,

Three from the lake that stands beneath the pole.

One is called Urd, another Verdandi,

Skuld the third; they carve into the tree

The lives and destinies of children.

Völuspá or “The Insight of the Seeress”, Poetic Edda

Norns are female beings who influence the destinies of men and gods. They are some of the more interesting and thought provoking figures in Norse Mythology. In Western culture, they are often compared to the Fates from Greek and Roman mythology and are depicted in film and literature, including Shakespeare’s Macbeth. However, it should be noted that the Norns were not the exact equivalents of the Fates.

Ancient Norse culture did not regard destiny as predetermined and unalterable. Rather, they held destiny to lie somewhere between the two extremes of pure free will and absolute predetermination. There are mentions of both greater and lesser Norns. 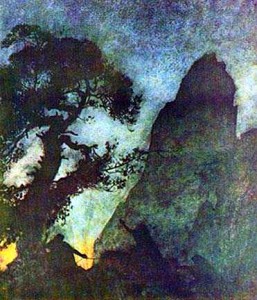 he Three Norns
The greater Norns were three sisters who personified Fate in all of its forms: past, present, and future. They lived together beneath the roots of Yggdrasil, the eternal tree which supported The Nine Worlds, including the home of men as well as Asgard, the home of the gods. Their names were Urðr (the past), Verðandi (the present), and Skuld (the future).

Urðr
In many texts, Urðr was also known as Wyrd. Some legends depict her as an old woman and others refer to her as a hag. She looked upon events gone by and could see all historical occurrences in the lives of the mortals and the gods.

Verðandi
Verðandi was a young maiden who portrayed innocence and freshness, the embodiment of active youth and vitality. Unlike her sister, Urðr, she looked straight ahead with confidence.

Skuld
The final Norn, Skuld was a mature woman in the prime of life who symbolized motherhood and passion. A veil of mystery surrounded her, and she impressed all who encountered her. Her gaze turned toward the future.

The Norns Duties
The Norns worked together to weave a complex tapestry. Each thread represented a single individual’s life; the length of the thread determined the duration of that person’s lifespan. Mortal men and gods alike had their destinies woven into the vast tapestry. The Norns attended the birth of every child, so new mothers were served porridge as an offering in the hopes of babies being blessed with happiness and success.

The Norns lived at the base of the World Tree and are the guardians of the Well of Urd, the substance of time and 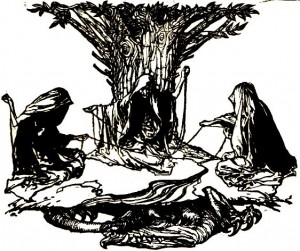 destiny, represented as a vast body of water. They released a rooster every morning, which crowed to awaken the gods and men. The three sisters watered the roots of the great tree daily.

Lesser Norns
Mention is made of lesser norns who acted as agents of providence, bringing good fortune or harm to certain individuals.These guardian spirits attached themselves to particular individuals at birth and followed a person throughout their lifetime. The exact number of lesser norns is unknown, but they influenced both humanity and the races of dwarfs and elves. To the ancient Norse people, they evoked awe and provided an explanation for the events of a difficult and unpredictable world.